The bio-inspired city of the future

By Usbek & Rica
Urban development and biology, infrastructures and nature... The outlines of our cities must be reinvented now, if they are to adapt more closely to the imperatives of the present and the future. 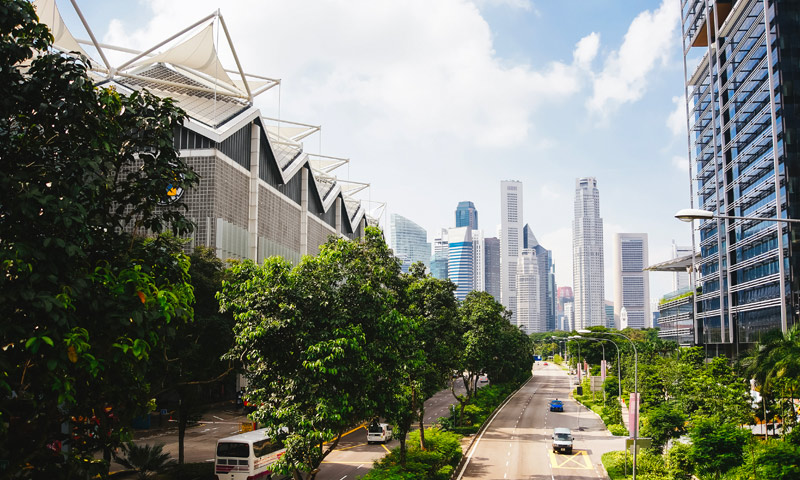 The principle of “urban metabolism” is gradually emerging in ideas on cities and their development. This expression, which was first coined in the 1960s, may sound surprising, but its full meaning become clear in the light of climate change, ecological issues and social evolution. A research article published by the University of Toronto, “The Changing Metabolism of Cities”, proposed a precise definition in 2007: “Urban metabolism might be defined as the sum total of the technical and socioeconomic processes that occur in cities, resulting in growth, production of energy, and elimination of waste”. In the opinion of the authors, studying and understanding this metabolism is the key to a global approach that is necessary to build sustainable cities that are “in good health”.

The biological analogy is far from neutral. If a cities are living organisms, then shouldn’t we draw inspiration from nature to manage them better? Biomimicry is already successfully used to design machines, robots and electronic chips. So, could it help to make our communal spaces more comfortable, ecological and sustainable?

This is a sizeable challenge. Cities occupy 2% of the surface of the Earth, but they are home to 55% of its population. They are also “the engine of the global economy, representing 80% of the global gross domestic product (GDP1), but they also produce 75% of CO2”, as noted by the World Economic Forum. Most importantly, they are constantly growing. The 2018 United Nations report on the subject listed 371 cities with more than one million inhabitants in 2000. Today, there are 548, and there will be more than 700 by 2030. And the number of megacities with more than 10 million inhabitants will reach 43, ten more than today, by 2030.

Last year, the United Nations warned that we have about “twelve years to limit the catastrophic scale of climate change”. So, developing more ecological cities in keeping with sustainable development appears to be crucial. Sabine Barles, a lecturer and researcher at the CNRS, specialising in urban change, considers that, “today, the issues related to urban metabolism and the resulting environmental footprints are considerable”. “The overriding trend that characterises the processes of urbanisation is the increase in the consumption of resources and the corresponding rise in emissions, which reflects the non-sustainability of urban societies”, she explained back in 2008.

Keeping it natural: the benefits that nature brings to cities

Reintroducing nature into our cities, taking inspiration from nature to revisit our infrastructures and urban processes on more organic bases, could be ways of building more sustainable cities with a more optimised metabolism. A number of convincing examples show that solutions do exist. The high-profile “Bosco Verticale”, inaugurated in 2014 in Milan, Italy, shows how residential tower blocks can be home to genuine “vertical forests”, made up of hundreds of trees on every building. This concept has been adopted in the Netherlands, South America and China, and the Italian architect behind the concept, Stefano Boeri, has also designed a “forest city” that will be inaugurated in Liuzhou, China in 2020. In this instance, trees and gardens are not simply added to the buildings. They are the main and omnipresent component of the urban environment. Seen from the sky, this town of 30,000 inhabitants will be almost indistinguishable from the surrounding forests. It is a genuinely new urban model, where 40,000 trees and one million plants will absorb CO2 and form a natural barrier to noise, while also contributing to geothermal regulation. So what if the city of the future were a forest?

A multitude of initiatives have been taken to reduce urban pollution and purify the air using technologies that draw on natural processes. The CityTree, created by Germany’s Greencity Solutions, takes the form of a public bench topped by a vertical wall containing a ventilation system that uses natural moss. The system has already been installed in around ten cities, including Oslo, Hamburg and Courbevoie, France, where it improves the air quality by filtering out fine particles, dust and nitrogen dioxide. It can absorb up to 240 tonnes of gas per year, or the equivalent of hundreds of trees, while occupying just a few square metres.

Smart bricks and bio-inspired street lights: when infrastructure works like a living organism

The European “Living Architecture” (LIAR) project, launched in 2016, goes a step further, by aiming to develop “modular bioreactor walls”. These walls, designed to be used in conventional building techniques, are made up of bricks containing genuine “microbial fuel cells2”, capable of recycling wastewater and producing electricity. These microbial walls could be used “in numerous urban systems, creating a form of programmable micro-agriculture in residential, public or government buildings, including schools and hospitals.” Could the walls in our cities become large-scale living organisms in the future?

Light and lighting systems could also draw inspiration directly from the living world. In the forefront of this subject, the French start-up Glowee develops solutions based on bioluminescence. Living organisms, in particular in the sea and that can be grown infinitely and only produce 100% organic waste, can be transformed into a “living light source straight from nature, at the crossroads between biomimicry and synthetic biology”. In 2017, the MIT demonstrated that plants can be enriched with nanoparticles that make them luminous, creating the opportunity for interior lighting systems that do not need any electricity, or even “self-powered tree street lights”. And what about growing our own street lights?

Towards the resource-city: a city that renews its own natural resources

We have also come across aquaponic farms in derelict warehouses (Detroit, United States), vertical farms in city centres, in supermarkets or restaurants (Germany, the Netherlands) and systems that convert pedestrians’ steps into electricity (London, Hong Kong). All these projects are making a positive change to our view of our cities and the way they are organised. The city can, and must, become more “natural” and more “connected”, including to biological usages and processes. In the city of the future, everything will be a resource.

To ensure that the entire urban ecosystem continues to function properly, the city must become truly regenerative, giving back to nature what we take away. It is no longer enough for the city of the future to use its resources in an optimal manner. Now it must enhance the ecosystems on which it depends. Usages in the regenerative city will mimic nature’s circular metabolism by operating in a closed-loop system that transforms waste outputs into inputs of value. This will mean that they actively contribute to the regeneration of the natural resources they consume. The Canadian agency HMC Architects is already designing schools that reuse water produced from their air conditioning systems to cover local irrigation requirements, and hospitals that capture stormwater. They have an ambitious vision of regenerative design: “We’re dreaming up eco-cities with an entirely edible landscape that feeds its residents”.

So, the new vision of the city emerges. It becomes a “resource-city” : “a city that is circular, resilient and collaborative, capable of producing and conserving the resources it needs to function, in a co-constructive approach with all the stakeholders.”