Between 2014 and 2017, SERAMM, SUEZ’s subsidiary, has built a retention basin upstream from the Géolide wastewater treatment plant and buried under Ganay stadium. The facility, which has a storage capacity of 50,000 m3,improves the metropolitan area’s wastewater treatment system by enabling it to treat wastewater and stormwater during periods of heavy rainfall. With an investment of 50 million euros by the SUEZ group, the basin, which required three years in construction, will undergo tests for six months before becoming operational in autumn 2017.

A facility that supports the Urban Community Contract and Bay Contract

For Aix-Marseille-Provence metropolitan area, the aim of the Ganay basin is to protect and regenerate natural marine environments at the emissary outlet in Cortiou creek.Combined with dynamic stormwater management solutions provided by SUEZ, the basin will prevent 1 million m3 of untreated wastewater being discharged into Calanques National Park, cutting current discharge by 50%. The facility helps to realise one of the most ambitious projects of the Aix-Marseille-Provence Urban Community Contract and Bay Contract, which provide for five new basins that will ultimately collect 140,000m3 of stormwater.

A complex project delivered six months ahead of schedule

Thanks to a tightly run schedule, strict organisation of construction workers, favourable weather conditions and several sites being managed simultaneously, the project was delivered six months ahead of schedule, enabling the technical test phase and ultimately the facility’s entry into service to be brought forward. During the second half of 2017, the city of Marseille will be building an artificial turf football stadium on top of the basin.

A highly-controlled process that interconnects with water networks

During dry weather, the Géolide wastewater treatment plant is able to treat all wastewater in Marseille and 16 other municipalities[1]. During violent storms, however, the plant cannot deal with all the stormwater. Thanks to Ganay retention basin, wastewater and stormwater levels will now be under control.
When a storm occurs, runoff water will now be diverted to the Ganay basin where it will be stored up to a total capacity of 50,000 m3. Until now, this occasional surplus wastewater was discharged into the sea. The Géolide monitoring centre manages the frequency of the draining once the rain stops, either temporarily or permanently. When full, the basin is emptied within 24 hours. 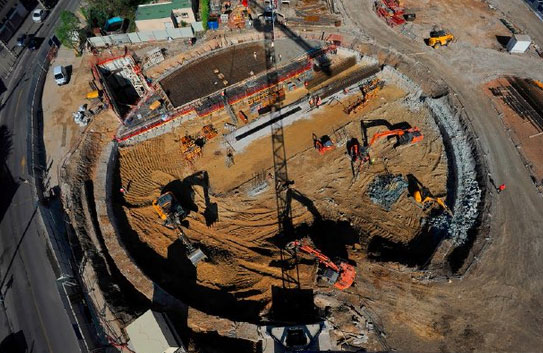 SUEZ excellence and complementarity of expertise for this major project

Successful completion of the project required SUEZ group to deploy its entire range of expertise in the fields of water and engineering. Egis provided contracting authority support and Vinci Construction was project manager.

Collective investment for the benefit of all