From innovation to treatment, SUEZ provides soil remediation expertise for a large and complex project in the Netherlands

In the Netherlands, our teams are managing a long-term and complex project in Amersfoort. As part of former railway activities, the municipality has to deal with the remediation of a former industrial site, located by an important train station, including oil and tar removal. Alongside the municipal teams and the different partners, some innovative and tailor-made processes had to be conceived and implemented to face the challenges.
With more than 150 000 inhabitants, this is the second largest municipality of the Utrecht province. It is also known as one the largest Dutch railway junctions, due to its location on two of the main east to west and north to south railway lines.
Caption: Amersfoort railway network in the 20th century / Copyright: Aviodrome, Lelystad
In the first half of the 20th century, the trains were lit with gas lamps. This gas was produced at the 'Vetgasfabriek', a gas plant based on oil heating process. Oil and tar waste were then discharged on the soil at infiltration ditches and basins near the train station. As a result, the subsurface is highly contaminated at 3 locations, with pure tar and oil infiltration.

In 1995, the site was classified by the Dutch government as a serious case of contamination based on spreading risks and as a priority remediation project, due to the very significant annual increase of contaminated groundwater above the intervention value. Several key stages then followed. In 2000, the remediation plan project was approved for the area and a monitoring system was implemented onsite. In 2019, the teams evaluated the metrics and entered into a new phase of the project, with the removal of the potential risks, including the mobile pure product from the former basins.

Removal of a complex pollution, a new milestone in Amersfoort’s project

One of the most important and challenging aspects of this project was to organize and extract the tar contamination. To do so, the municipality has chosen SUEZ to conceive and implement appropriate solutions.

This part relies on 3 key steps: 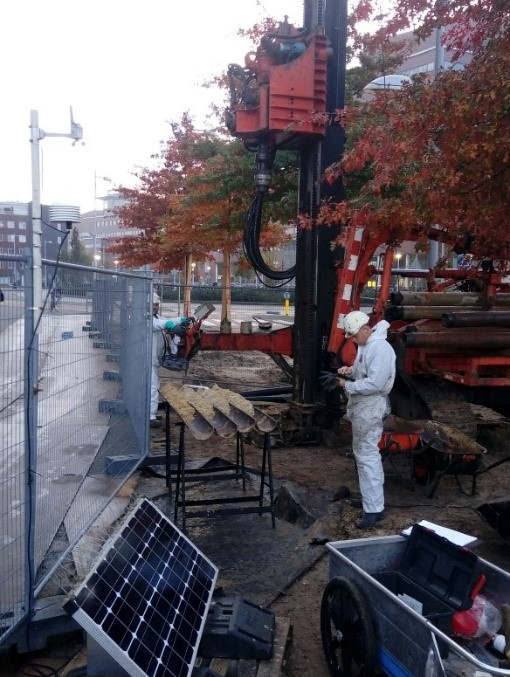 After a month of preparation, SUEZ started the construction of the in-situ system in June 2020. This helps the teams to remove the contaminants in a later phase. The extraction system consists of almost 300 filters to a depth of approximately 10-11 metres. Before the set-up, probing and drilling records were made. In addition, air measurements were carried out to control and limit emissions to the surrounding area.

Picture caption: Extraction system implemented by SUEZ Remediation teams to remove tar contamination, after probing and drilling tests / Copyright: SUEZ
The design phase ran in parallel with the installation of the extraction system. For this stage, the control, the monitoring and the final design of the remediation operations were worked out jointly. To this end, lab tests with innovative sensors were conducted, as well as a pilot test in the field to test sensors, pumps, etc. in practice.
Picture caption: Remediation site in the immediate vicinity of the railroad station / Copyright: SUEZ 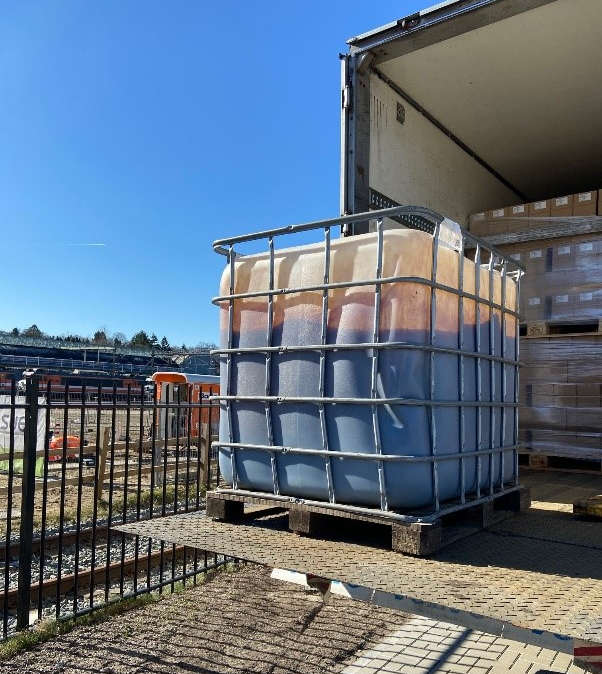 In March, teams tested the tar extraction system with the intended pumps, sensors and measurement and control technology on a limited proportion of the extraction filters (10 pieces). The first test results are encouraging: about 800 litres of tar have already been extracted and disposed.

Picture caption: First extraction of tar pollutants based on the innovative process specifically designed to meet the requirements of the remediation project / Copyright: SUEZ
A challenge met by the teams. From now on, the project should include approximately 5 years of maintenance and operations. The aim will be to remove and pump up 1,000m3 of pure product. After that, the tar removal system will be dismantled, and the area will be remediated for future urban projects.