Feeding the planet sustainably, the challenge of the century

Ten billlion people... By 2050, the Earth will have four times more people than a century before, and three billion more than today. Feeding the world sustainably with a balanced diet while restoring and preserving the environment is clearly one of the major challenges now facing us.

Water, soils, biodiversity, climate... all these aspects of our planet are now affected by our food production methods. Today's agriculture is responsible for 25% of global greenhouse gas emissions and uses 70% of the fresh water consumed every year. A contributor to climate change, it is also one of its main "victims", under the effects of drought, falling yields etc.

Above and beyond agriculture, the entire food chain impacts our environment – from food processing and transport, to the challenge of food waste (which represents a third of the food produced worldwide). A radical transformation of our food systems and patterns is therefore required if we are to succeed in producing more, better food in the future while respecting the environment.

Minimising the environmental footprint of our production methods: agroecology

Awareness is growing at all levels of the food chain of the need to better consider ecological imperatives and manage resources better.

From Africa to Latin America and Europe, the principle of agroecology is gradually gaining strength: a set of environmentally friendly agricultural techniques, which maintain biodiversity, limit soil erosion, reduce post-harvests losses or recycle biomass and waste.

Optimising water management, the cornerstone of the food chain, is one example of an imperative where significant progress are being achieved, in a context of growing resource scarcity. In Italy, the Milan San Rocco treatment plant irrigates over 22,000 hectares of agricultural crops with recycled wastewater. In Chile, wastewater sludge from the La Farfana wastewater treatment plant is transformed into fertiliser for farmers, who therefore have a major role to play in the sector's transition towards the circular economy. As producers of organic waste,  farmers can now also become producers of new resources. A solution such as Organix, the first digital marketplace in France for organic waste, enables these waste producers to sell it to industrial companies able to transform it into energy. The circle is complete.

These ecological transitions are now being called for by a growing number of players in the sector. At the UN Climate Action Summit in September, 19 leading agri-food industry signed the "One Planet Business for Biodiversity" commitment, promising to fight deforestation and promote soil regeneration through agriculture.

While these efforts are essential, they are unlikely to be enough. Preserving resources and ecosystems will also require a profound shift in our consumption patterns and dietary habits. This evolution is already under way.

Eating better: good for us... and for the planet 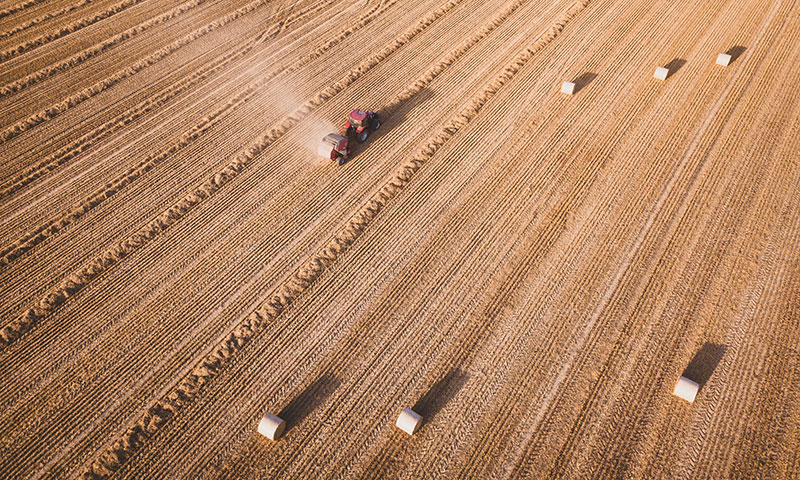 Our relationship with food has evolved considerably over the last ten years. As well as the debate on GMOs, consumers are concerned with the sources, quality and production methods of their food. Dozens of mobile apps and connected tools help us understand our bodies and our needs better, supporting appropriate diets, measuring changes in our metabolism and analysing the contents of our plates.

This evolution chimes with growing climate, environmental and ethical preoccupations. With intensive livestock rearing[1] responsible for nearly 15% of carbon emissions, going vegan or locavore (eating foods produced locally) is more than just a fad. It expresses a rejection of systems that are no longer appropriate for the current state of our planet.

But should we stop eating meat? There is no global answer, because the nutritional needs of each population must be taken into account alongside dietary habits at global scale. Practices that are evolving according to trends, but which are above all subject to several criteria (level of development, purchasing power, religious practices etc.).

For researchers from Johns Hopkins University[2], two types of diets could successfully reconcile overcoming malnutrition with the fight against climate change. While the first, a two-thirds vegan diet, combines vegan and omnivorous eating patterns, the second includes eating insects to reduce our environmental footprint. More and more professionals in the sector are embracing this path.

While several fast food chains – such as Chipotle Mexican Grill, Del Taco and Blaze Pizza – have added vegan options to their menus, start-ups such as Beyond Meat and Impossible Foods, are producing meatless meat. This “meat” is synthesised from vegetable proteins, looking and tasting like meat while being healthier, more environmentally friendly and eliminating animal cruelty. This trend is only going to increase: according to a study published in June 2019 by the consulting firm AT Kearney, only 40% of the meat consumed in 20 years will actually come from animals.

Others rely on edible insects. Particularly high in proteins, vitamins and mineral salts, insects can be reared with far less impact on the environment than traditional livestock.

Outside countries where insect eating is a secular tradition (ants in Mexico, grilled cockroaches in Thailand etc.), the trend is only showing up in the West. Some restaurants already offer insects, and major retailers are getting in on the act: Sainsbury's, the UK's second biggest supermarket chain, sells bags of roasted crickets as a snack.

But these are not just isolated examples. According to Meticulous Market Research, in ten years’ time, 730,000 tonnes of edible insects will be produced, compared with 50,000 today. And more people are believing in it: SUEZ has acquired a stake in Nextalim, a company specialising in entomology, which has developed a solution based on rearing flies to convert the biowaste into proteins for animal production. A real circular solution!