Eating and drinking in 2038

By Usbek & Rica
Usbek & Rica is a French media on a mission to “explore the future” through a magazine, digital content and events. SUEZ gave it a free hand to imagine two forward-looking scenarios on the future of food. Marius Robles, a futurologist, co-founder of Reimagine Food think-tank and creator of the start-up Food by Robots, commented on both scenarios. 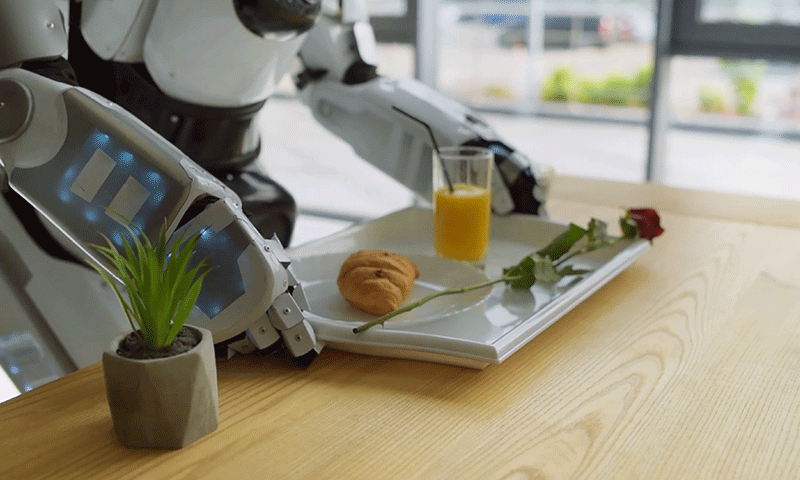 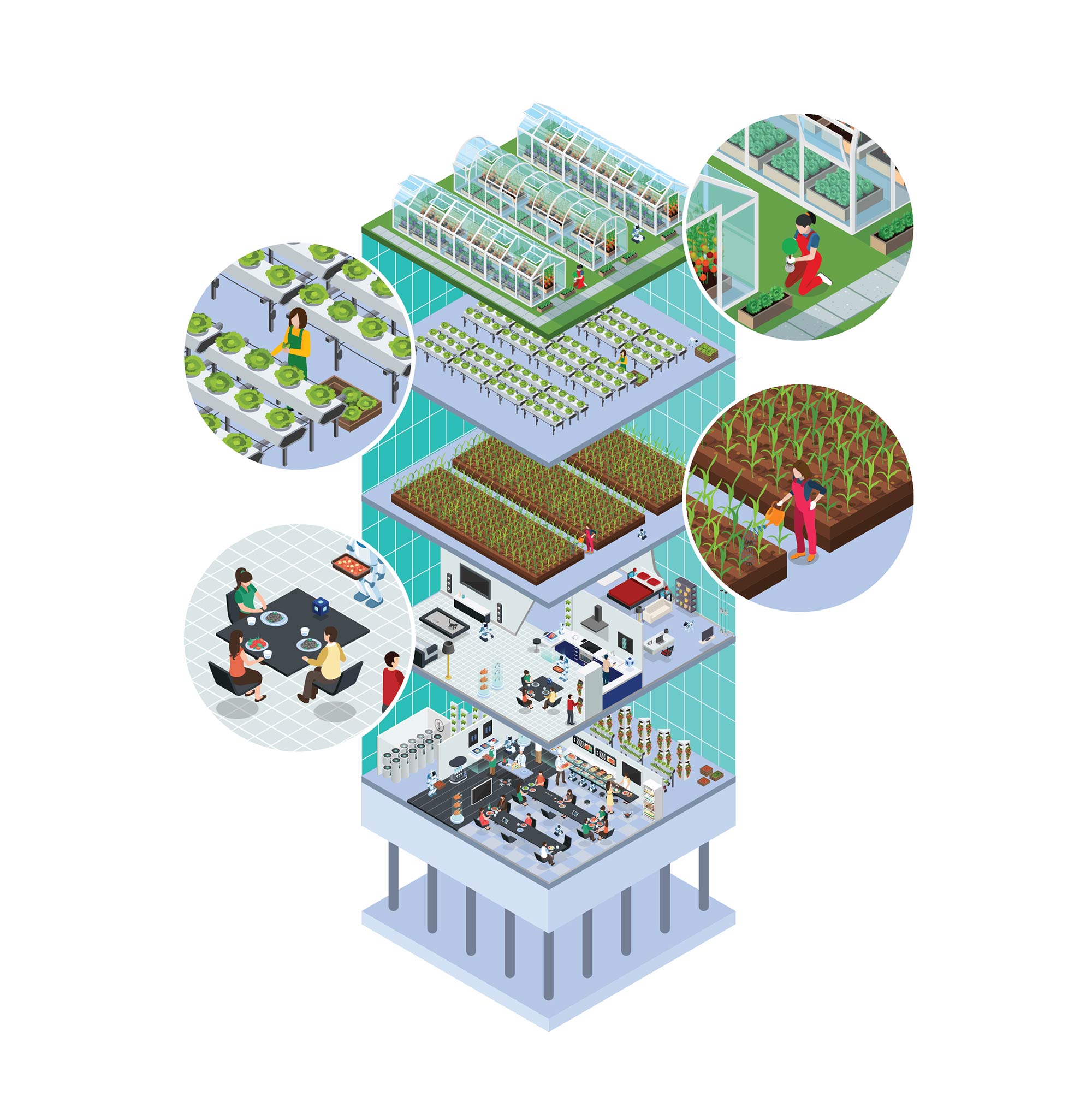 2038. Today, two out of three earthlings live in cities. In two decades, food - and its production - have been radically transformed. Agriculture has become mainly urban and local.

“Agritecture”, or the successful combination of architecture and urban agriculture, is now the norm. Urban farms born in the early 2000s have set the trend. Today, in the major cities, large vertical and self-sufficient energy farms have been installed, often based on aquaponics, while residential buildings include several floors or terraces dedicated to growing crops. Light, temperature and humidity are skilfully controlled, water is carefully dosed and recycled, and pesticides and insecticides are banned. Smart systems oversee and optimise the crops, while adapting the quantities to the locations and the seasons. Fruits and vegetables are no longer transported in trucks, they are produced where they are bought and consumed. Avoiding transportation and limiting storage helps to reduce the carbon footprint, but also leads to much cheaper, fresher, healthier fruits and vegetables.

Even back in the 2010s, robots could pick 25,000 raspberries per day. Today, machines are used everywhere to plant, cut and harvest with precision and incomparable efficiency. Farmers wear enhanced reality goggles or contact lenses, and labour the soil using advanced scientific knowledge and techniques to coordinate the sowing operations and to orchestrate the work done by the machines. But traditional agriculture is not dead yet. It still exists in many regions, where it plays a fundamental role in preserving biodiversity and living capital in the broadest sense.

What we used to call “meat” has also changed significantly. Meat can now be grown in vitro from animal cells, it can be synthetic, often based on plant proteins, or it can be reconstituted from a varied range of sources, including plants and insect powder. In the 2010s, several start-ups demonstrated the economic viability of meat that is produced in laboratories from animal stem cells. In 2019, this development resulted in the creation of the “MPF, Innovation” industrial alliance, with a view to developing the market for meat, poultry and fish produced directly from animal cells.

By 2021, hamburgers and nuggets produced from plant proteins and nutriments had become the new norm in most fast-food brands. At the same time, interest in the development of edible insects on an industrial scale seems to be a matter of course. Insect farms emit 4 times less CO2, occupy 14 times less land and demand 50 times less water than beef livestock farms. The pioneering companies in this sector emerged in the 2020s and are now powerful multinationals. Their farms, some of which are urban, produce several million tonnes of edible insects every year, which are praised for their nutritional qualities. In 2038, more than one half of the proteins consumed in the western world come from insects.

Intensive livestock farming has almost completely disappeared. Less than one quarter of the “meat” consumed today comes from beef, lamb or goat farms. Several countries have purely and simply banned all “animal” meat production, as well as imports. 30 years ago, livestock farming was criticised for its water footprint and greenhouse gas emissions that accounted for 15% of emissions due to human activity; today, its environmental impact is almost negligible.

Marius Robles’opinion of this scenario

In the next 30 years, we will witness more changes in food than in the 17,000-year history of what we call agriculture.

Energy will most definitely be free. Agricultural land will no longer be necessary, and nor will farm animals. Food production will have become independent of the weather conditions. It is probable that the need to import or export food products will no longer exist.

“Smart farming” will take the form of connected and robotic urban farms where cutting-edge technologies will be made available to farmers to meet their needs. The people who operate these smart farms will be reinvented farmers, who have become urban farmer-scientists. Robots will do almost anything, from sowing and harvesting, to selecting, distributing and cooking. To be honest, smallholder farmers will tend to disappear. In fact, it is already the case. Since 2003, the total number of farms in the EU has decreased by more than four million. 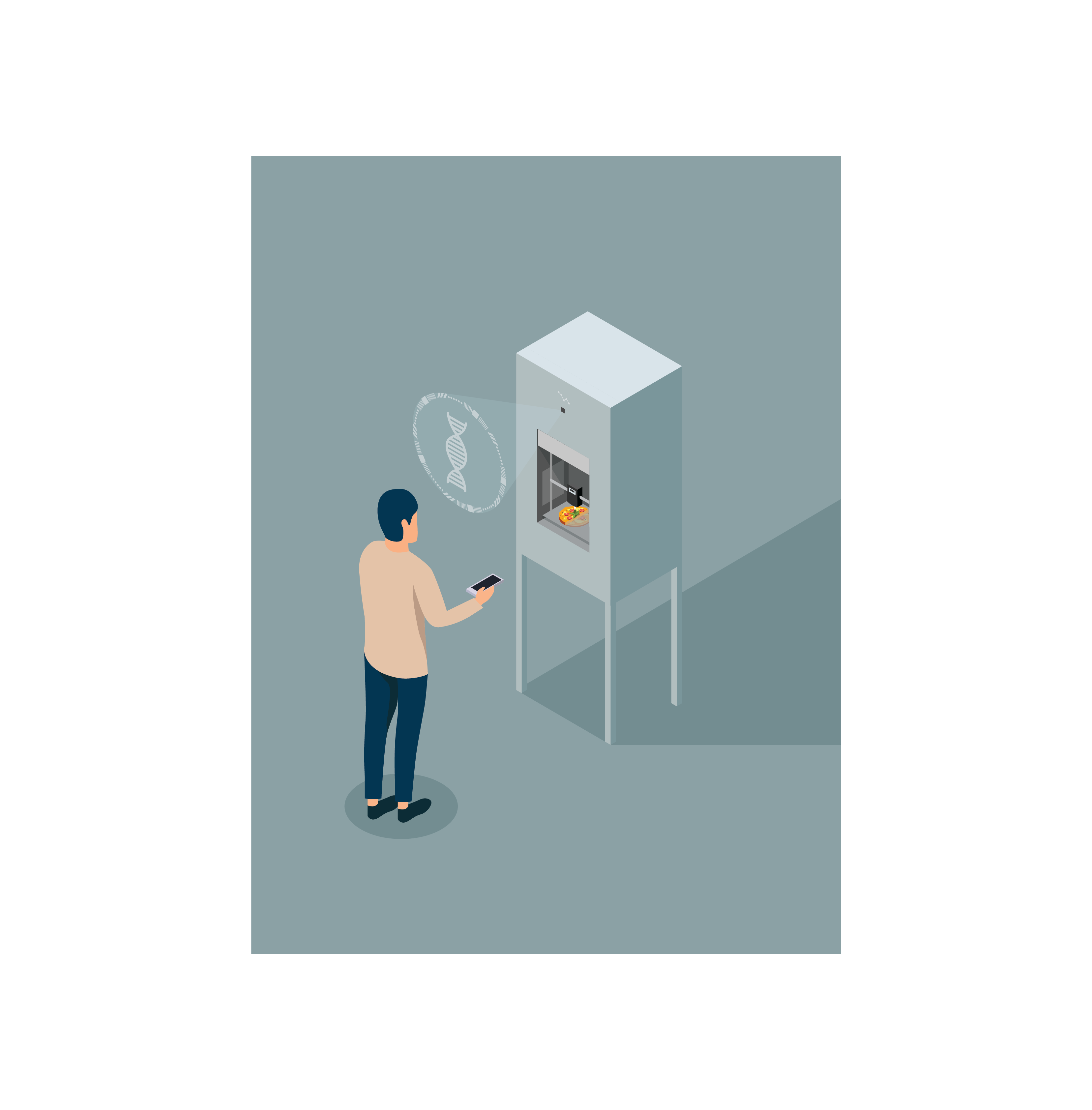 Two trends emerged at the end of the 2010s, which then collided into one another, producing some innovative modes of eating in the decades that followed.

The first involves the future of catering. After the fast-food boom (in 2015, more than one third of restaurant in France are fast-food outlets), we are now thinking of “virtual restaurants”, without any tables or chairs, sometimes installed in places such as car parks, where frequently personalised meals were made and ordered using mobile applications. The advent of automated delivery tools (self-driving trolleys and delivery drones) from the 2020s onwards only accentuates the phenomenon... Welcoming establishments serving fine cuisine continued to champion traditions and gastronomy, while other forms of restaurants gradually ceased to be simply venues, where people met to enjoy dishes chosen from a limited menu, to become almost laboratories, preparing increasingly personalised dishes delivered to customers’ homes.

This second trend was spawned by the latest discoveries in biology, physiology and genetics. After the announcement in 2003 of the complete sequencing of the human genome, it became clear that nutrition and genetics were destined to be combined in order to improve health and wellbeing. By 2016, companies had enabled individuals to analyse the microbial flora of their own organism (microbiota) to make personalised nutritional recommendations, while in the 2020s, many restaurants are suggesting to their customers menus specially adapted to their genetic profile.

In 2038, food is widely personalised. Urban dwellers are increasingly using insect or plant protein powders, fibres, artificial milk and other vitamin-containing supplements, produced by automated farms or developed in laboratories. These meals can be prepared at home in just a few minutes by sophisticated and multifunctional machines that prepare dishes adapted to the tastes, the physiology and the nutritional needs of every member of the family. In the kitchen, the 3D food printer has long been replacing the cooking robot.

All over the world, food has never been so varied. As the United Nations’ Food and Agriculture Organisation (FAO) regretted in 2000, “three quarters of food worldwide comes from just twelve plants and five animal species.” In 2038, food is prepared, composed and mixed from hundreds of natural and synthetic sources, including the most surprising, such as those bacteria that convert carbon in CO2 into proteins. Ultimately on the future menu? A thousand and one tastes combining nutritional values that can be declined infinitely.

Marius Robles’ opinion of this scenario

There will be no difference between the natural and the artificial, in other words, between things made by nature and those created by humans in laboratories. The taste and the form of food will be imitated to perfection, and new foods, that we cannot even imagine today, will be created. We will produce certain types of vegetables, herbs and proteins at home using “food computers”. We will develop flavours rather than dishes, and will teleport food using smart new devices that will be enhanced versions of 3D printers. 40% of food will be produced in the home and personalised, while new market economy models will emerge. Hyper-local production will become a reality. Through smart gadgets and sensors in our kitchens, we will analyse not only our food waste but also what we cook and the food we eat, which will be adapted to our DNA in order to prevent the diseases to which we are genetically exposed. Food waste will be controlled by a system of taxes based on the way we use food.