In the Indian city of Hyderabad , road traffic is growing at a rate of 12% a year. The city asked SUEZ to look into ways to ease congestion in its streets and provide better quality of life for its population of almost 10 million: cleaner air, quieter and more attractive streets, and better mobility for everyone.
The mission

Located in central India, Hyderabad has almost 10 million inhabitants. It is the country’s sixth largest city in terms of population. Known as “Cyber City”, it is India’s second Silicon Valley after Bangalore, with its HITEC City biotechnological district and an information and communications technology centre.

Just like in many cities across the world, the streets of Hyderabad are seeing an increasing number of people, more and more cars and a growing number of journeys. And yet the streets cannot be expanded.

Sometimes the city’s roads and viaducts are literally clogged up with vehicles. People move around in a cacophony of car horns and clouds of pollution, risking their health and even their lives. Those who have no other means of transport travel on buses that often get stuck in traffic jams. The situation is making life in the city more and more unbearable.
+12
%
more road traffic a year since 2011 in Hyderabad
50
%
of journeys in the city cover a distance of less than 2km
Our solution

Thanks to funding from the French Development Agency and in coordination with the Telangana government, teams at SUEZ Consulting and their partners (the architect Bruno Remoué and the Indian consultancy firm UMTC) are helping Hyderabad to become a cleaner city, with more breathable air, more attractive, safer and quieter streets, and greater opportunities for mobility, even for those who cannot afford their own car or taxi fares.

The aim of the study is to show what could be done using a 15km pilot segment crossing the city from north to south: better pavements and pedestrian crossings, shady cycle paths, bus lanes (maybe even a tramway), public spaces, trees, etc.

Organising the streets for people rather than cars

50% of journeys cover a distance of less than 2km. People must be encouraged to walk and cycle, through better pavements, cycle paths, safe pedestrian crossings, fewer lanes for traffic.

Furthermore, public transport is still the best invention for transporting a maximum number of people with the minimum amount of energy and pollution. As the metro system cannot cover the whole city, it is vital that more street space is reserved for public transport.

1
15km pilot segment crossing the city
1
bus lane is equivalent to three motorway lanes, in terms of number of people transported
Open in a new tab 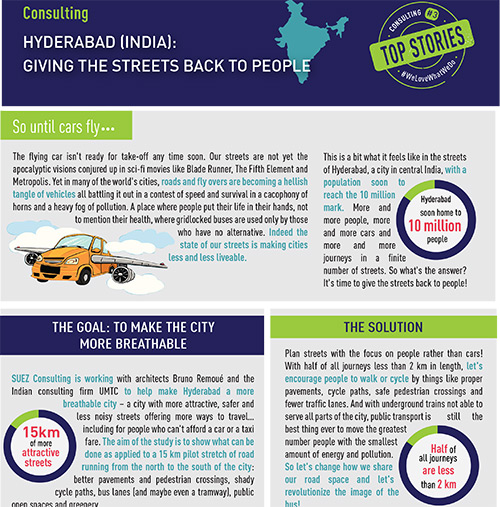