UU used its subscription to Optimizer TM for InfoWorks ICM to address flooding issues in the Bury catchment. Optimizer™ was directly integrated with InfoWorks ICM, allowing UU to import their models into Optimizer™, saving time and generating the most accurate optimisation possible.

Before partnering with Optimatics, United Utilities had performed an initial investigation into potential solutions, including opportunities for SuDS strategies. They wanted to resolve the flooding issues in the most cost-effective way possible and determine the best combination of SuDS conveyance and storage strategies. 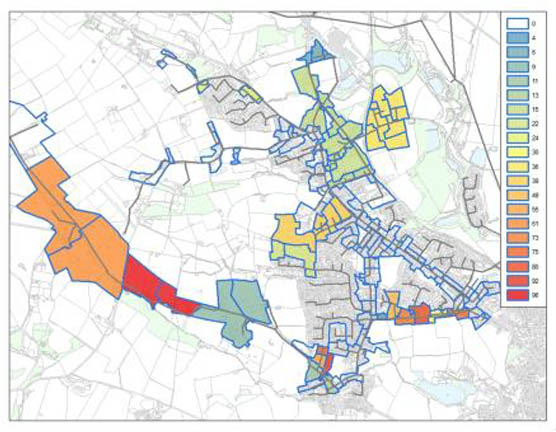 The project team used SuDS Studio opportunity mapping data to inform the potential locations, sizes, and strategies to consider in the optimization. These options were combined with the high-level SuDS planning ideas the United Utilities team generated in their initial investigation, resulting in a wide range of potential SuDS opportunities for selection in the optimization.

United Utilities used Optimizer™ to quickly address a wide range of potential scenarios, such as:

Optimizer™ identified the best combinations of traditional and SuDS strategies to resolve flooding within the catchment.

For this catchment, the most cost-effective solutions were primarily conveyance and storage based improvements. However, Optimizer™ also identified a handful of high performing SuDS strategies to supplement the traditional infrastructure upgrades and align with United Utilities desire to invest sustainably.

The project also helped UU develop an easily automated process to apply to other areas moving forward. The project team was able to build a standardized, repeatable process for:

Perhaps most importantly, Optimizer™ showed that it could help remove bias toward traditional or SuDS solutions and reasonably consider all potential strategies in an impartial and defensible way, allowing United Utilities to make the best possible planning decisions.