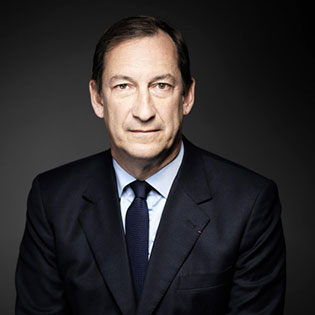 Nicolas Bazire, born on 13 July 1957, is a graduate of the French Naval Academy and Institut d’Études Politiques de Paris, and studied at École Nationale d’Administration.

Mr. Bazire was an auditor and then an auxiliary judge at the Cour des Comptes. In 1993, he became Chief of Staff and special assistant to Prime Minister Édouard Balladur. Managing Partner of Rothschild & Cie Banque from 1995 to 1999, Mr. Bazire was then appointed Chairman of the Partnership Board. He has served as Chief Executive Officer of Groupe Arnault SAS since 1999.
Other major offices and positions held during the last five years Current
Chief Executive Officer of Groupe Arnault SAS
Chief Operating Officer and Permanent Representative of Groupe Arnault SAS* to the Board of Directors of Financière Agache SA*
Vice-Chairman of the Supervisory Board of Les Échos SAS*
Director of LVMH Fashion Group*, LVMH Moët Hennessy-Louis Vuitton S.A.*, Louis Vuitton pour la création*, Financière Agache Private Equity SA*, Agache Développement SA*, Europatweb SA*, Carrefour S.A., Groupe Les Échos SA* and Atos
Member of the Supervisory Board of Montaigne Finance SAS* and Semyrhamis SAS*
Manager of Les Chevaux de Malmain SARL
Member of the Board of Directors of SBM (Monaco)
Expired during the last five years
Chairman of Société Financière Saint-Nivard SAS, Director of IPSOS S.A., Tajan S.A. and Go Invest S.A. (Belgium)
Member of the Supervisory Board of Lyparis SAS and of Rothschild et Cie Banque SCS
* Companies belonging to the LVMH/Arnault Group.
Read also