Taxes applying to shares include the tax on the dividends themselves and the tax applicable to added-value from share transfers.
In France

Taxation of shares in France

For ordinary securities accounts, as soon as a dividend is paid, a single flat rate tax (PFU) of 30% is deducted at source, comprising social security contributions of 17.2% and flat rate income tax of 12.8%.
Exceptional measure: households whose reference taxable income indicated on their tax notice is below €50,000 for a single person, divorcee or widow(er) or €75,000 for a couple taxed jointly may be exempt from the flat rate income tax of 12.8%. This exemption makes it possible to defer payment of this tax. In order to benefit from it, they must submit a request to their financial institution no later than 30 November of the year preceding the receipt of the dividend.

It is possible for taxpayers to opt for the former tax system for dividends with a progressive income tax scale if it is advantageous for them (in practice, if the marginal rate of tax is lower than 30%).
By stating on your tax return that you are opting for the progressive scale, the flat rate income tax of 12.8% will be deducted from the tax due, assuming that you have paid it and thus have not taken advantage of the exemption scheme. Any overpayment will be refunded to you.
The progressive scale option enables you to benefit from an uncapped fixed allowance of 40% on gross dividends and to be able to deduct the supplementary social security contribution (CSG) paid amounting to 6.8% of the total taxable income for the year in which it is paid. Social security contributions are deducted at source at a rate of 17.2% before tax allowances.
It should be noted that the progressive scale option is binding upon you as it applies to the whole year and therefore also concerns coupons, interest and capital gains on transferable securities
CAPITAL GAINS REALISED AFTER 1 JANUARY 2018

For ordinary securities accounts, net gains on sales of shares are liable to a single flat rate tax (PFU) of 30% on all proceeds from the sale, comprising social security contributions of 17.2% and flat rate income tax of 12.8%. Unlike dividends, the gain is not taxed when it is made, but in the following year, i.e. in 2019 for capital gains realised in 2018.

Capital losses from disposals incurred in 2017 may be deducted from capital gains of the same nature realised during the year of transfer, or in the 10 subsequent years. This option was open from the first euro resulting from disposals for net capital losses, reported from 2011.

However, the finance law for 2018 stipulates that capital losses may only be imputed to capital gains realised in the same year. Taxpayers can thus no longer decide against imputing their losses by deferring them to subsequent years.


With PEAs, tax benefits are acquired at the end of the fifth year (for a standard eight-year term). If you do not make any withdrawals before the end of the fifth year, the shares you hold in this account will be exempt from income tax (excluding social security contributions) on the realised capital gains and dividends. Since 1 January 2019, if you make a withdrawal before 5 years, the tax rate applied is the flat rate tax of 12.8% (previously, the tax rate was 19% for a withdrawal between 5 and 8 years, and 22.5% for a withdrawal within 2 years). Note that the payment limit of PEAs has been €150,000 (€300,000 for couples) since 1 January 2014.

It should also be noted that, under the French PACTE law, changes have made the PEA even more favourable, by abolishing the early closure of the PEA in the event of partial withdrawal within five years. Similarly, withdrawal after five years no longer takes away the right to make further contributions.

Finally, since only individuals resident in France for tax purposes can open a PEA, the PACTE law provides for the creation of a Young people’s PEA for young adults (aged between 18 and 25) included in their parents’ tax household, limited to a maximum of €20,000, increasing to €150,000 when the holder leaves the tax household. The aim is to encourage young adults to invest in equities.

Gifts or inheritance of shares according to French law. Note that gifts are exempt from duty every 15 years, limited for each parent, grandparent or great-grandparent to €100,000 per child, €31,865 per grandchild and €5,310 per great-grandchild.

Pursuant to article 115-2 of the French tax code, the free allocation by SUEZ of Company shares (or, where applicable, of allotment rights to fractional Company shares) to its individual shareholders, is not considered to be a distribution of income from movable assets.

The profit from these preferential provisions is not subject to any condition for individual shareholders residing in France.

The cost basis of Company shares (or allotment rights to fractional Company shares) received as part of the Contribution-Distribution operation is equal to zero.

The attention of shareholders is drawn to the fact that this presentation is a summary of the currently applicable tax system. It is not intended to constitute a complete analysis of all the tax consequences that could apply to a shareholder. It is therefore recommended that shareholders consult their usual tax advisor in order to study their specific situation.

The following provisions present the main tax consequences applicable to individuals who hold securities in their private assets and do not carry out stock market operations on a regular basis.

“Taxation of shares abroad” refers to “Individual shareholders who are not tax residents in France”.

Dividends distributed by the Company to individuals who are not tax residents in France are in principle subject to a withholding tax of 12.8% for dividends paid from 2018 onwards; the 30% rate previously in effect now applies only to legal entities.

However, this withholding is often reduced under international tax treaties. It is the responsibility of the shareholders concerned to contact their tax advisors to determine whether such treaty provisions may apply to their particular situation and determine the practical application of these conventions.

Download the form 5001-FR Liquidation of withholdings on dividends
Capital gains on disposals realised by persons who are not tax residents in France, according to the meaning of article 4 B of the French Tax Code, are in principle not subject to tax in France.

It is specified that the allocation of Company shares or, where applicable, of allotment rights to fractional Company shares, to SUEZ shareholders whose tax residence is not in France is not subject to any withholding tax in France.

By its decision no. 00.538 of 27 May 2008, the Advance Tax Ruling Service (“SDA”) of the Belgian federal public service for finance has indicated the following, for the application of the 1992 Income Tax Code (CIR – Code des impôts sur le revenu):

As a result of this decision, the free allocation of Company shares by SUEZ to its shareholders who are tax residents in Belgium must be considered as a reimbursement by SUEZ of share issue premiums considered as released capital, up to the limit of the market value of the Company share, as valued on the day of distribution (this market value being fixed, on the basis of its first opening list price).

The SDA indicated, in essence, that if the Belgian accounting process implies processing the operation as a neutral reorganisation from an accounting point of view, the difference that may surface between the accounts value and tax value of SUEZ shares and Company shares will not make either taxable profits or tax-deductible charges possible and is therefore neutral from a tax point of view. The capital gains and losses realised by these shareholders at the time of subsequent disposal of shares will, for the application of tax provisions, be calculated on the basis of the tax value of the shares, on completion of the distribution.

Capital gains realised as a result of disposals of allotment rights to Company shares by persons who are not tax residents in France, according to article 4 B of the Tax Code, are not subject to tax in France.
Publications 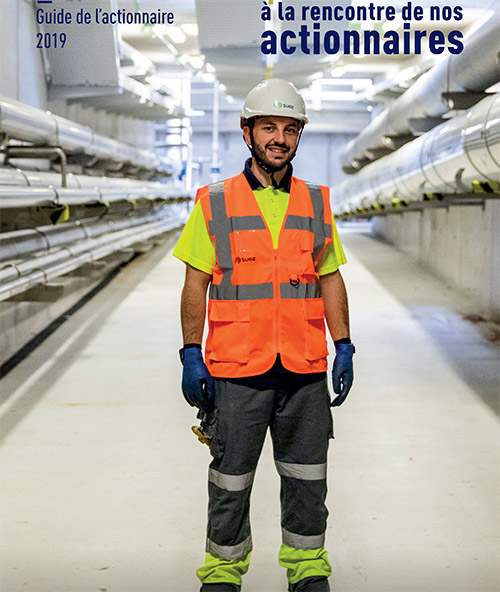 A team dedicated to you