On 17 January 2021, with support from Ardian and Global Infrastructure Partners (GIP), SUEZ proposed a quick and amicable solution to the situation created by Veolia’s unsolicited offer. The consortium supports the SUEZ 2030 strategy. In this framework, SUEZ has met with Veolia to discuss a solution that creates fair value for our shareholders and is coherent with the interests of all the parties concerned, by reinforcing the two French leaders in the environmental services sector.
Our amicable solution

SUEZ, with support from Ardian and GIP, has an amicable solution to propose in the interests of all stakeholders

Today, we are extending a hand towards Veolia in the hope that we can work together to build an alternative solution that reinforces the respective strategies of both groups. In the current economic and health situation, it is our responsibility to find a solution. France would be better equipped to face international competition with two solid world champions rather than one vulnerable one (see the study by Patrice Geoffron and Altermind consultancy published on February 17, 2021 or download the summary of the study).

SUEZ’s board of directors received a letter of intent on 17 January 2021 from Ardian and GIP. The letter proposes a quick and amicable solution to the situation created by Veolia’s unsolicited offer. The board was unanimously in favour of this initiative, which would enable an offer to be made to all shareholders, ensuring rapid implementation conditions and:


• Reinforcement of the two French leaders in environmental services, via an amicable solution,
• Preservation of employment in France and abroad during this critical economic period,
• Preservation of essential competition, notably in France,
• Acceleration of the development of SUEZ on booming markets,
• Increased investment to bolster its innovation capacity and technological expertise,
• French majority capital holding guaranteed, with a significant increase in employee shareholders.

The board of directors asked the Group’s CEO to organise discussions with Veolia.

This is a solid proposal by the world’s two largest funds, which, in itself, is proof of the attractiveness of SUEZ and the faith investors have in our SUEZ 2030 strategic plan. Ardian and GIP support our industrial project and want to accelerate our development.

Caisse des Dépôts in favour of a negotiated solution

SUEZ challenges the validity of the filing of the tender offer Veolia indicates having initiated on February 8th, in breach of the enforceable order rendered by the President of the Commercial Court of Nanterre, which indeed orders Veolia:

- not making the French stock market regulator “AMF” recipient of a tender offer project;
- not initiating a tender offer over Suez’s securities not previously approved by the board of directors of SUEZ;
- taking all required measures to ensure effectiveness of this order until the outcome of future proceedings.

Philippe VARIN, Chairman of SUEZ's Board of Directors declared: “In its letter dated January 7th to the Board of Directors, Veolia called for dialogue. Even though the first meeting in respect of these discussions has just taken place, Veolia puts an end to such dialogue unilaterally and in bad faith. Veolia thus shows clearly that it has never intended to comply with its commitment to amicability. SUEZ will defend by all means the interests of its shareholders, its employees and all stakeholders.”

SUEZ is a world leader in environmental services

Our solid, efficient industrial project is rooted in our 160-year history, our capacity for constant innovation, our expertise and our culture oriented towards partner relations: becoming the world leader in environmental services by 2030.

The Group’s strategy creates value for all stakeholders

Our Group has a mission of public interest: to help preserve and restore the essential elements of our planet, its water, soil and air. Every day, our 90,000 employees help to build a sustainable environment and anticipate the demands of the future by fighting climate change and its consequences, protecting the environment, and fighting social and geographic inequality.

In 2019, SUEZ launched its “Shaping SUEZ 2030” strategic plan, which aims to make the Group the world leader in environmental services by 2030. We want to be the preferred partner of our customers, employees and stakeholders. The objective of this plan is to build the Group’s value creation, with tangible positive financial results from 2021.

To realise our vision, we are implementing a transformation strategy, structured around three areas: a more selective growth trajectory, simplified operational processes and a new culture to embody the excellence-oriented spirit of SUEZ.

In September 2020, we published the results of the SUEZ 2030 strategic plan, surpassing our targets and confirming the unique value-creation potential of our Group for all its stakeholders. We are ahead of our targets thanks to the tangible results of implementing the re-orientation strategy announced in 2019: various objectives already achieved in 2020 in multiple areas.

In January 2021, driven by the successful deployment of our strategic plan, we published our preliminary results for the second-half of 2020, which exceed the guidance we set.

With SUEZ 2030, our Group is in a position to seize the many growth opportunities in our businesses, in line with our goal of becoming an agile leader in the environmental services of the future.

We are already a leader in innovation

Today, there is no doubt that we are already a leader in our sector in terms of innovation. We implement innovative solutions to meet the needs of each of our customers and have recently launched offers to accelerate the transition to the circular economy with the CircularChain blockchain, to improve the protection of populations with COVID-19 City Watch, to reduce greenhouse gas emissions on industrial sites, and to improve air quality in our cities.

We have a strong culture of partnership

Our partner-based culture enables us to cultivate the trust of our local authority and industrial customers and to develop responsible, customisable economic models that correspond to their requirements and challenges.

In January 2021, for example, after a five-year collaboration with Fermentalg* and in response to the growing climate emergency, the creation of a joint venture was announced to accelerate the industrialisation and marketing of solutions to capture and transform CO2 into bioproducts.
*A major French player and expert in the research and bio-industrial exploitation of micro-algae.

SUEZ and Veolia have different strategies

Size, the principal argument underpinning Veolia’s proposal, is not a competitive factor

With a view to clarifying the ongoing debate surrounding the Veolia SUEZ proposal and to understanding the industrial stakes underpinning it, SUEZ asked the economist and Paris Dauphine University professor, Patrice Geoffron, supported by Altermind consultancy, to conduct an analysis of the principal argument put forward to justify the project: the predominance of size as a competitive factor in environmental services markets.

The approach is a transparent and detailed one. The study conducted by Altermind and Patrice Geoffron, published on 17 February 2021, is based on an analysis of the environmental services markets, a review of academic publications, and discussions with SUEZ. The work was designed to be a detailed, in-depth contribution to the debate surrounding the project.

This expert second opinion demonstrates that for these two leaders in environmental services, and the only “world champions”, an increase in size would not constitute a competitive factor. On the contrary, the proposal threatens to reduce the incentive to innovate and differentiate, and hamper the new organisation’s agility due to the costs and time spent on the merger.

It is also worth pointing out that while environmental services markets may be highly concentrated at a local level, the industry is relatively unconsolidated globally. Today, SUEZ and Veolia are the only two players operating in all the environmental services, across the entire value chain and throughout the whole world, and the revenue gap between them and their competitors remains substantial.

In these markets, size is an asset but its expected advantages (mainly economies of scale and the impact of scope) “drop off” once they reach a certain point. Indeed, owing to their integrated nature and internationalisation, SUEZ and Veolia have reached this “critical size” and the advantages of a growth in size are not obvious. Instead of this increase in size, SUEZ and Veolia’s competitiveness depends on their capacity to set up international innovation ecosystems, with universities, startups, industrial customers and partners, both in France and abroad.

In conclusion, Veolia’s proposal runs the risk of weakening the two groups, of causing them to miss the opportunity of a green economic recovery and, beyond that, of depriving regional and local authorities of the benefits brought about by competition between two world leaders.
Open in a new tab Download

Read the summarised version of the study

A merger between SUEZ and Veolia would mean weaker competition and a reduced capacity for innovation...

If we want France to preserve its leadership, we must avoid losing a flagship of French industrial expertise. Environmental activities demand a high degree of specialisation, operational excellence and a race for innovation. This implies a strategy based on skills and selective, targeted growth, not a strategy based on size.

Veolia’s project, if implemented, would affect competition in several countries (including France) and innovation capacity; it could ultimately have an impact on the price and quality of the essential services provided to the public. As explained by Sébastien Liarte, professor, “It’s competition that pushes Veolia and SUEZ to innovate, reduce costs and increase productivity. Without this competitive pressure, why would the new entity even try to make efforts in the areas of innovation, price or safety (...)" (Opinion piece published in La Tribune, 11 September 2020).

Veolia’s project is not welcome. This is apparent, for example, in the reaction published in a press release on 9 October 2020 to the Paris court’s interim decision (9 October 2020) suspending the purchase of SUEZ shares by Veolia, because the personnel representatives had not been consulted. Veolia claimed that blaming Veolia for failing to organise such a consultation was "perfectly ludicrous" .

... and would have serious implications in terms of employment

It seems most unlikely that the merger of the two companies would be without social casualties. We asked a consulting firm to assess the social impacts of this project; they estimate that between 4,000 and 5,000 jobs would be lost in France and almost twice as many worldwide. Such a project cannot be implemented without eliminating duplicate positions in support functions, sales development teams, and of course regional management teams.
Concerns

Elected officials stand against the project in the name of employment and competition
In the midst of the current health crisis, elected officials express doubts about Veolia’s project and its consequences, which might result in higher prices and lower service quality for essential services.

Mayors express unease about this operation

76% of elected officials fear that the price of water and sanitation services would increase if the SUEZ / Veolia merger went ahead (IFOP study for SUEZ, November 2020). 60% consider that the merger of Veolia and SUEZ would have generally negative effects for local authorities in the coming years. 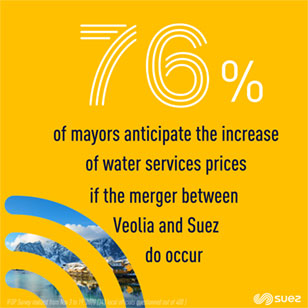 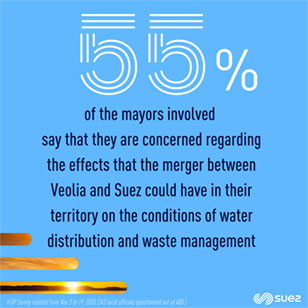 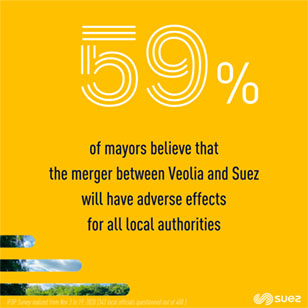